The acoustic investigation creates simulations of noise impact to measure the contribution of each wind turbine to the noise level in the neighbourhood. This assessment will serve to verify that the facilities comply with the regulation based on the government order of 26 August 2011 amended by the order of 22 June 2020.

It takes place in several phases:

What approach to adopt?

Wind turbines are governed by legislation on facilities classified for environmental protection (ICPE in French), which lays down specific measures for preventing impacts on the environment and the neighbourhood: a general obligation to site wind turbines more than 500 metres from residential areas, incident noise level fixed by prefectoral approval order (+3dB at night and +5dB during the day in relation to background noise – in the absence of wind turbine noise).

Measurements were taken with sound level meters at the base of the dwelling closest to the future wind farm in February 2021. The wind on the site is also measured with a wind mast. This then serves to match the noise measurements with the wind measurements in order to correlate the recorded noise levels with the measured wind levels.

The design office can evaluate the noise impact of the wind project using a mapping of the initial acoustic state. This is done with specialized software that models noise propagation in the environment.

By accurately positioning the wind turbines in relation to the dwellings, and knowing the acoustic emissions of the wind turbines in operation, one can estimate the number of decibels the wind farm will generate at the nearest dwellings. The calculated emission levels (the difference between the wind farm’s noise levels when idle and in operation according to different measured wind speed) must be under 3dB at night and 5dB during the day in the regulated noise abatement zones (more particularly inside and outside the closest dwellings).

If necessary, corrective measures (occasional shutdown or restraint of the machines) are imposed in order to comply with the regulation.

Verification of noise impact during operation

When our wind farms are completed, they undergo measurements for acceptance in order to verify and confirm their compliance, and if need be to adapt the wind farm’s management plan. 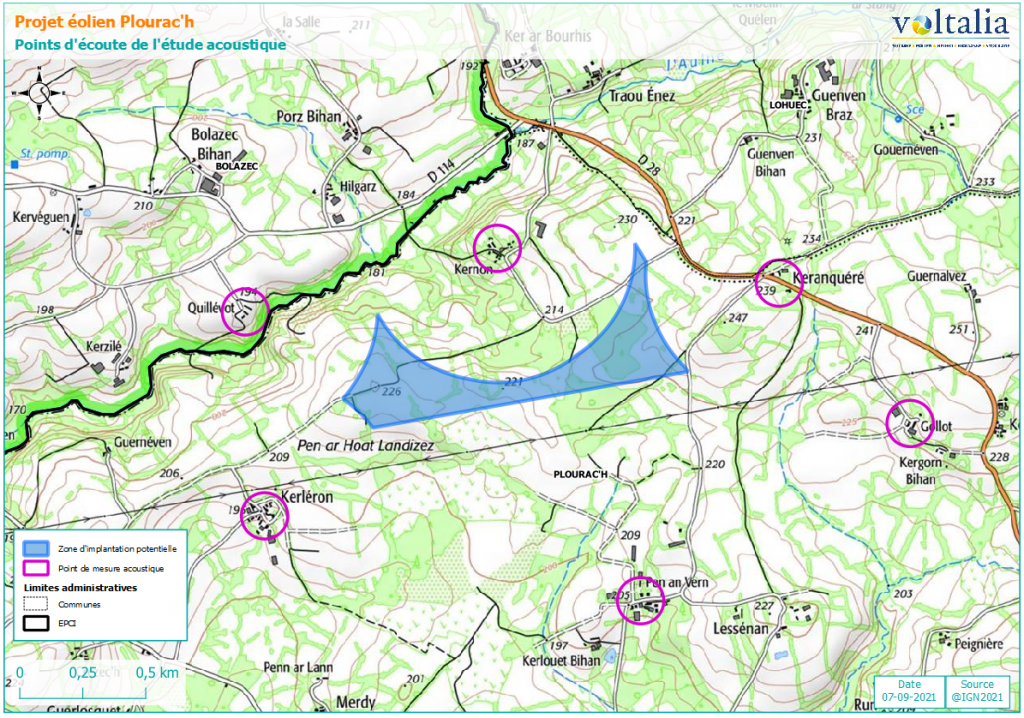 How is acoustic compliance verified and controlled?

Acoustic emergence is based on the difference between the equivalent weighted noise level A of the ambient noise including the noise of the equipment in operation (in this instance the wind turbines) and the residual level.

A restraint plan is drawn up based on several restraint methods offering a degree of flexibility and thereby limiting production loss. They consist in gradually slowing down the turbine rotor’s speed of rotation to reduce the acoustic power of the wind turbines.

Optimization plans serve to anticipate an operating plan for the wind farm that meet regulatory acoustic requirements after the machines have been commissioned. To confirm and fine-tune these calculations, a acceptance measurements campaign will be carried out during the operating phase of the wind turbines, according to measurement control standard NFS 31-114 “Acoustics – measuring noise in the environment with and without wind turbine activity”, for both the site’s prevailing wind directions. Depending on the results of this acceptance measurement, restraint plans may be simplified or reinforced (total shutdown of the wind turbine is possible if established regulatory thresholds are exceeded) in order to comply with current regulations.

This restraint plan is implemented using the wind turbine’s remote-control software via the SCADA system. When the anemometer (wind speed) and the wind direction indicator at the top of the wind turbine’s nacelle record wind data “under restraint” and according to period (diurnal: 7.00-22.00 or nocturnal: 22.00-7.00), the programmed restraint method will start. In concrete terms, the rotor’s rotation speed will be reduced by altering the pitch of the blades (a blade orientation system on the hub or nose of the wind turbine) in order to reduce their wind resistance by adjusting the blade’s aerodynamic profile. These restraint methods thus consist in increasing or reducing the angle of inclination of the blades. The advantage of this technique is that it avoids the use of a brake that could also produce noise emissions and increase wear and tear on the moving parts. In the event of a scheduled shutdown of the wind turbine as part of the restraint plan, the blades will be “feathered” in the same way, in order to cancel the blades’ wind resistance and thereby prevent rotation of the rotor.

In addition to a restraint plan in the operational phase of the wind farm ensuring compliance with acoustic regulations, the equipment manufacturers regularly introduce technological advances that reduce noise emissions, be they mechanical or as a result of the wind.

On a wind turbine in operation, the airflow runs along both sides of the blade perpendicular to its main axis. At the blade’s training edge, the airflow leaves the blade and becomes turbulent, resulting in the formation of eddies. It is these eddies that make the noise. Thanks to the serrations, the transition between the trailing edge and the free airflow is less abrupt, resulting in fewer eddies and thus less noise.

The serrations also have the advantage of modifying the wind turbine’s sound spectrum. The noise consists of several frequencies at different levels (the levels being the amount of perceived sound in decibels). A low frequency causes a low-pitched sound that travels far, whereas a high frequency causes a high-pitched sound, which quickly attenuates in the atmosphere. The serrations modify the sound spectrum and reduce the emission of low frequencies in favour of high frequencies, thereby attenuating the sound propagation in the air and thus reducing noise impact on dwellings.

The serrations thus have a twofold benefit: they reduce acoustic power and mitigate sound propagation in the atmosphere. Although serrations are often fitted as standard by most manufacturers of wind turbines, they can also be fitted on wind farms already in operation. 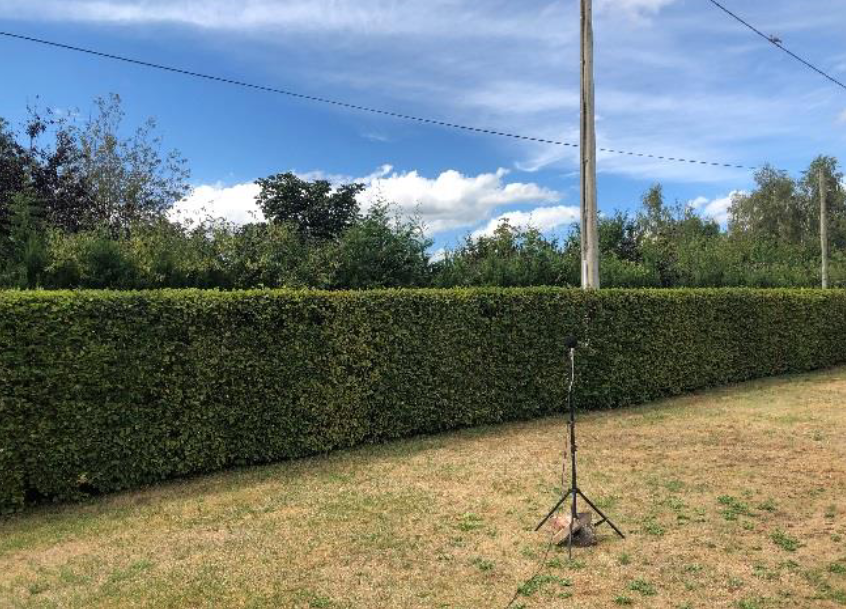